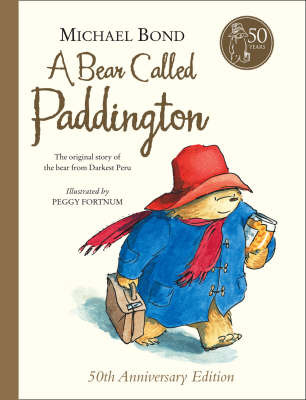 Celebrate Paddington's 50th Anniversary with this exquisite commemorative edition. Unabridged and illustrated in spectacular full-colour throughout, including previously unpublished artwork by the original illustrator, Peggy Fortnum, this beautiful keepsake will enchant established Paddington fans and a new generation of readers alike. "A bear on Paddington Station?" said Mrs Brown in amazement. "Don't be silly, Henry. There can't be." Paddington Bear had travelled all the way from darkest Peru when the Brown family first met him on Paddington station. Since then their lives have never been quite the same! for ordinary things become quite extraordinary when a bear called Paddington is involved.

Michael Bond was born in Newbury, Berkshire on 13 January 1926 and educated at Presentation College, Reading. He served in the Royal Air Force and the British Army before working as a cameraman for BBC TV for 19 years. In 1997 he was awarded the OBE for his services to children's literature.